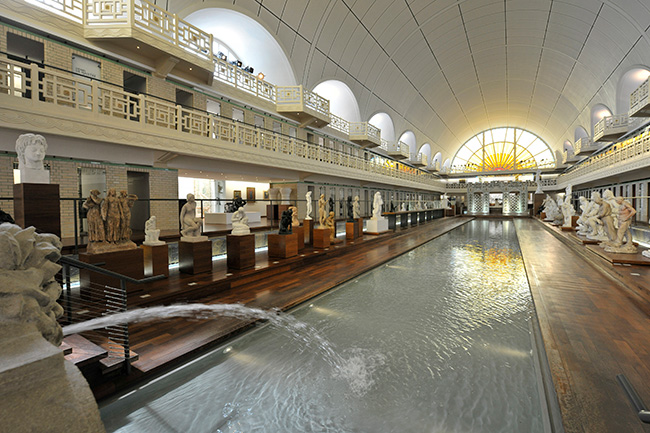 A former municipal Art Deco swimming pool has been transformed into a museum. The fascinating La Piscine – André Diligent Art and Industrial Museum is located in the city of Roubaix, Nord-Pas-de-Calais.

Built between 1927 and 1932 on the initiative of Mayor Jean-Baptiste Lebas, “the most beautiful public swimming pool in France” was designed by Albert Baert, an architect from Lille. The pool was designed to allow workers to swim despite their difficult living conditions. It also acted as a way to bring people from all socio-economic backgrounds together in a divided city.

Reinterpreting the layout of Cistercian abbeys in a neo-Byzantine spirit, Albert Baert’s building is organized around a monastic garden. The large basilica nave of the basin is lit by stained glass windows symbolizing the rising and setting sun. The cafeteria or “swimmers’ dining room” contained a hairdresser, manicure and pedicure salon, steam rooms and an industrial laundry room.

It is therefore understandable why the swimming pool has been so successful as the only Olympic-size swimming pool in an agglomeration of several hundred thousand inhabitants. In a city with a strong social divide, this basin of life and social mixing was the only meeting place where, for decades, the children of industrialists and the world of run (similar to back-to-back houses) really lived side by side.

Jean-Paul Philippon, one of the architects of the Musée d’Orsay, was chosen to redesign the site. Work began in January 1998 and was completed in 2001, giving the monument new life. Jean-Paul Philippon’s project has transformed the central place of the site, the swimming pool, into a magical space, where a water mirror reflects the art collections.

The applied arts collection is presented in the former swimming pool area, with the showers and changing rooms transformed into showcases and consulting rooms. The collection of works of art is presented in the old wings of the baths. The old pump room has become the museum’s restaurant and the souvenir shop is now set up in the spectacular setting of the filter room. In the decorative and monumental garden of sculptures, you will find beautiful marine mosaics on the edge of the basin as well as a length of water of 40 meters with a Neptune in sandstone (The Lion). The cloister garden has been transformed into a botanical garden exploring the plants used in the textile industry (fibers, dyes, mordanting).

Since the creation of Roubaix Museum in 1835, its collections, built up throughout the 19th and 20th centuries, broke down all the barriers between applied arts and fine arts. The painting collection includes works by Weerts, Dufy, Mondrian and Lempicka, spanning the 19th and 20th centuries. The collection of modern sculptures, featuring Rodin, Picasso, Lachaise, Orloff and Giacometti, among others, is a highlight of the visitor experience. Its collection of decorative arts also presents ceramics from Sèvres, Picasso, Chagall, Pignon and Dufy; Grüber stained glass; and Gallé glassware, furniture and jewelry.

You can finish or start your visit in a large room dedicated to the history of Roubaix which combines the gigantic panorama of the Grand Place de Roubaix designed by the Jambon-Bailly workshops for the 1911 Northern France Exhibition with a gallery from portraits of Roubaixois from businessmen to workers to prominent members of the art world.