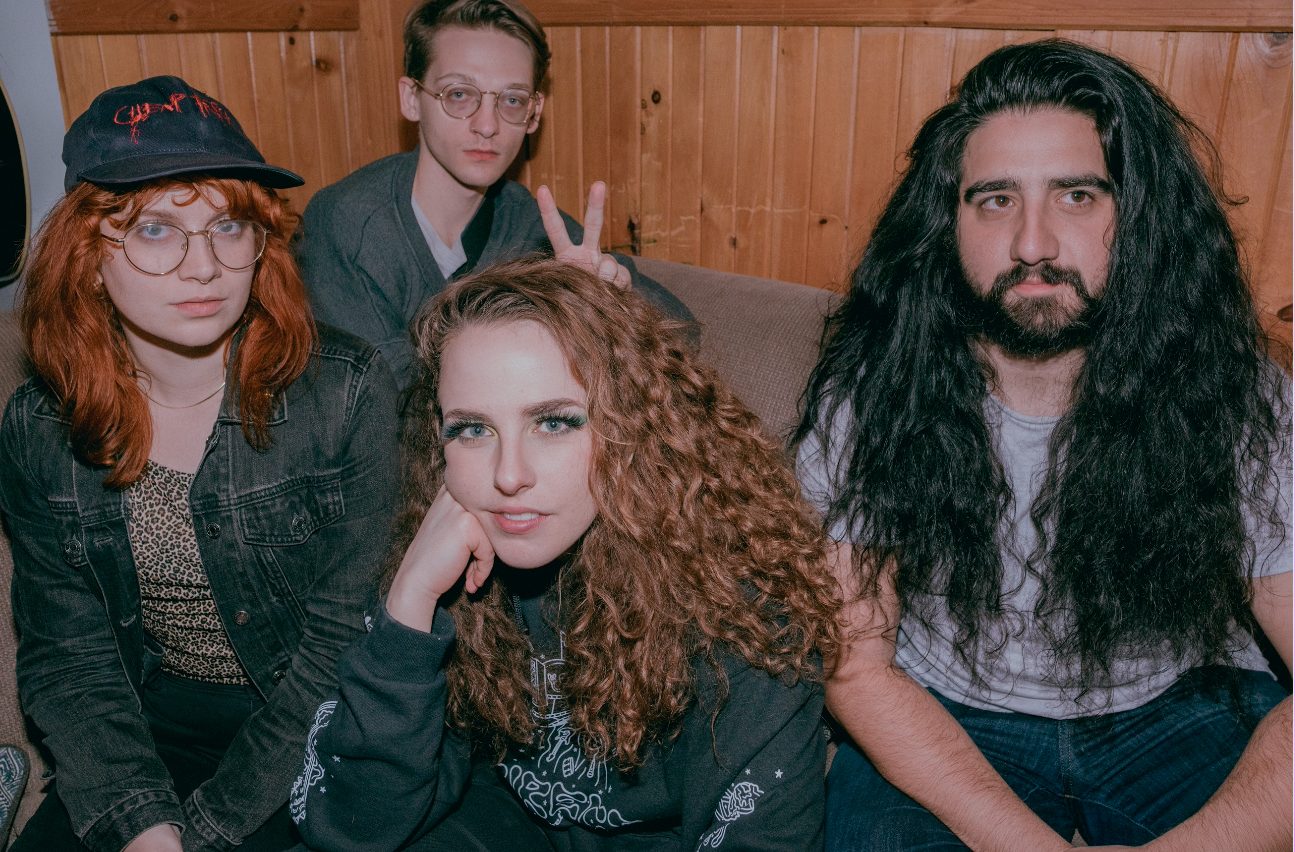 There was no precedent for a group’s second comeback after a hailed DIY debut by Hayley Williams, but Florida emo foursome Pool Kids didn’t bow to the pressure. After the pop-punk superstar said on Instagram that 2018 Music for Safe Sex is what Paramore “would have liked us to look like in the early 2000s”, dubbed Pool Kids. LP2, out July 22 on Skeletal Lightning, draws on influences as disparate as Pink Floyd to Rina Sawayama and is titled: “A big dick move,” says vocalist and guitarist Christine Goodwyne, flipping her Robert Plant loops. “It’s confident, it’s sexy,” adds bassist Nicolette Alvarez, smiling in a plaid skirt and denim jacket. (Onstage, Alvarez animates the school-uniform-punk shtick with a spunky sneer.) Guitarist Andy Anaya, who made a name for himself with You Blew It! of Orlando, and drummer Caden Clinton agree. “It’s like, We are here“, says Anaya.

Beyond great hair and a cult following in the storied realm known to some as Emo Twitter, the band has the endorsements of the multigender rock veterans who took them on tour – the Wonder Years, Mom Jeans, Into It. Over It., and later that year, the Mountain Goats (“they make great music,” John Darnielle emails me enthusiastically). On March 13, 2020, Pool Kids was on the road with the Wonder Years when they were sent home from St. Louis. The industry, every industry, seemed to be holding its breath. Their first comeback show, after almost two years, was a loud slot at Fest, the annual Halloween punk festival in Gainesville — not quite a hometown show, but just hours from Tallahassee, where they all met. Goodwyne and Alvarez, who have since moved to Chicago, were programmers at a local radio station. Alvarez calls Florida a “complicated place.” Clinton, who is performing this year with fellow Tallahassee Ethel Cain, thinks the isolated geography makes the bands (that can survive it) better. “You’re bound to tour, you’re bound to go out,” he says, wearing metallic rims and a Vegas-style silk black shirt.

When training in 2017, before they could afford a van – or know how to navigate the road with any common sense – they spent the first year touring in two cars during school holidays, to drive all night and sleep in gas stations. “We didn’t know what we were doing,” Goodwyne says. They had a demo on Bandcamp, and only two others burned to CD, which they gave away for free. “But we were just crazy enough to understand,” adds Alvarez. Although they were barely breaking even, they had already begun to set aside funds for what would become Pool Kids. For the past four years, they’ve been allocating a portion of their income to future studio time and music videos rather than paying for themselves. (Goodwyne went skydiving for “Arm’s Length,” released today and directed by Dan Watt; lead single “That’s Physics, Baby” chronicled a wild Wes Anderson quest.)

The namesake was their ark. “It gave us a purpose to live for,” says Goodwyne, and the band echoes that without hesitation. After years of scrambling for gigs, followed by a pandemic, things only got more complicated. A month before their first official rehearsal for Children’s pool, Clinton’s mother died in an accident. “We asked him if we should cancel it, but he said no,” Goodwyne recalled, “he had to do it for her.” They loaded up everything they had in 12 prismatic and tenacious hits, the enormity of which is revealed in the imposing dynamics of the group: meticulous builds, intricate breakdowns and Goodwyne’s searing range.

“We were like, Fuck it, try this crazy thing. Why not let Caden play with the trash cans and slip a Bird Scooter into it? remembers Alvarez. “We’ll try anything once if it means it’s going to be something really cool.” They even interpolated captured audio from Clinton’s handycam power-up sound; Alvarez, whose background is in jazz, also followed the keys and the theremin. Early in the process, Clinton set an uplifting standard: They should write stadium songs. After Hayley Williams’ applause, it occurred to her that they might not be playing in the basements any longer.

Goodwyne explains that although it is “a kind of rupture disc”, Children’s pool does not follow a linear narrative as much as an impressionistic narrative. “That’s how life really goes,” she says. “You oscillate between feelings and ideas. There are songs that have nothing to do with breaking up, just like how random things make you forget for a minute and then all of a sudden you’re back. Moreover, like any writer skilled with verisimilitude and pathos, she is interested in sensationalizing for power. She triangulates the most nuanced and messy emotions, pulling a memory in a more angry direction to see what tenderness emerges on the other side.

The cinematic opener, “Conscious Uncoupling,” sees her leaving the shotgun-overrun house where she lived with her ex, bidding farewell to her mother, her voice, and the “dumb look” on her face, intensifying. in vitriol and volume every time. measure. But in the end, she hesitates. “You still have time to take it back,” she sings, her voice soft and pleading. Goodwyne doesn’t consider herself an angry person, but she acknowledges that exaggerated angst imbues her writing with power. “Even if a song starts out totally calm, it’ll end like ‘I’M STILL ON THAT STUPID COUCH!'” she whispers, quoting the chorus. Stemming from her background shredding in hardcore and metalcore bands, Anaya adds which he finds “healthy to release negative emotions by playing fiercely”.

At nearly five minutes long, “Talk Too Much” is an epic diss track skewering the type of neo-demagogue whose platform is social media, and features one of the smartest lines on the record: ” Learning to ignore you / And people like you…because people like you know how to get what they want Repetition folds and wraps around the meanings of “like” like an origami rabbit-duck – d first an accusation, then a grudging concession. Goodwyne’s dexterity with craft extends beyond macro-level pun. “We tried to map it out,” she recalls when I point out the complex structure of the song, “and it’s like… ‘chorus’, ‘intro’? And then at one point, ‘quiet down chorus?’ And then it’s like ‘…bridge?’ ‘Second-end-chorus-thing?’”

The album’s transitions throughout are vigorous and startling, oscillating between heavy climaxes and hushed confessions. Occasionally Clinton hits a bass drum in proper metal double time – a genre he and Anaya gravitate toward. Elsewhere, the percussion disappears altogether, as on the slinky “Almost Always Better (Almost Always Worse)”, whose nasty pre-chorus is coupled with mechanized squeaks and beeps (“the R2D2 sounds”, according to Goodwyne) before sliding in watery touches, as if the robot had been carried away by a wave, nature prevailing over artifice. “Do you hear that?” Goodwyne sings, inviting the listener to pay closer attention to the cracks in his armor. It’s one of the defining properties of Pool Kids – balancing the math, the hyper-technical geometry with the pain that makes us human.

“We don’t want to be just a math rock band that only other musicians like. Instead of asking How to make it more technical? now i’m just trying to ask myself, How can I make this catchier?” she explains. “I’m less concerned with proving myself as a ‘woman guitarist’. I’ve proven myself enough. Now she wants to make music that dwells on people, whose melodies repeat themselves in their heads, move them at live performances.There’s a moment on “Swallow”—a vocoder-rinsed pop-goth ballad whose serpentine guitar riff snakes around its disaffected banter—where the time signature jumps from 7 /4 to 4/4 Here, the instrumental virtuosity makes the song more inviting, not less Unique, the group’s accessibility stems from their talent.

The experimentation that sets Pool Kids apart wouldn’t have been possible without the group’s intimate trust in one another – a family bond that ultimately proved not only helpful, but necessary. After all they had already endured, their very last week of recording, a new calamity struck. They had finished most of the follow-up in Seattle and traveled to Portland for “the home stretch,” fixing verses that didn’t quite work, adding playful embellishments. Their first day in the new space was an auspicious success. They stayed up after 2 a.m. working on the closer devastater, “Pathetic,” and finally got some sleep.

A few hours later, the assistant producer woke them up deliriously. The studio was flooded. Inches of water buried their gear still plugged into power boxes, Goodwyne’s crankset, Clinton’s battery. (Miraculously, Anaya’s amp survived – “the tone is just a little wetter,” he jokes.) The album itself, on hard drive, was rescued from the ground by sheer chance . Despite all they lost, they found ways to create with the tragedy. “Pathetic,” which they finished in its wake, samples iPhone footage of the flood. “What can we do with it? What can we do with it? Goodwyne sings in the final moments of the album, before proof of their triumph – the answer – rings out on the reverb.