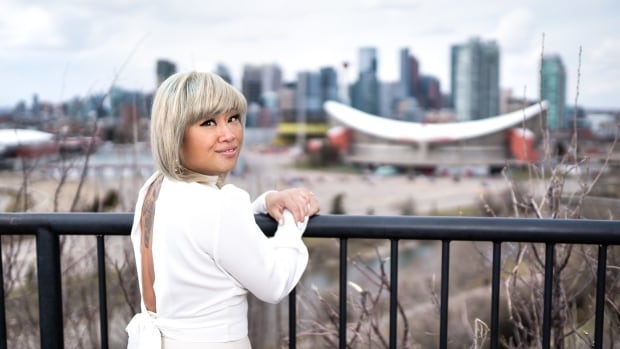 May is Asian Heritage Month. To celebrate, CBC Calgary is highlighting the rich heritage and contributions of Asian Calgarians through a series of 10 profiles throughout the month. We welcomed applications from a variety of people with different goals and interests and a shared commitment to giving back to the community. Through an internal voting process, CBC Calgary staff selected the Asian Changemakers for 2022 and asked them each to write their own profile. Here’s the latest, from Celeste Theory:

My name is Celeste Theory. I am of Vietnamese Asian descent born in North Bay, Ontario. and grew up in Calgary. I have moved 41 times in 41 years and have experienced bullying, racism, narcissistic parental alienation and abuse in all aspects of life. Despite my situation, I consider myself a successful person and a creative innovator.

My love for my community made me want to keep chasing my dreams and that is to create a community with open dialogue.

When I was 26, my mother took my sister and I to Con Tho, Vietnam, to visit relatives I had never met before. Experiencing the vast differences in language, economic standards, health care, education and quality of life was a major culture shock. During this trip, I also learned that in the early 1980s, my mother had escaped the Vietnam War by boat with my father — who was only 23 at the time — the younger brother of my father (only in his teens), my mother’s two younger brothers, a younger sister and my older sister (only two at the time).

During their escape, their boat was capsized by pirates, and my mother’s two brothers and little sister perished. She was separated from my father and her brother-in-law. As my older sister clung to my mother’s shoulders, my mother was forced to stand still for four hours. It was then that the same pirates held her captive. After two days they released her where she, together with my sister, had to swim to safety and ended up meeting my father in a refugee camp.

I remember looking at the same ocean as far as the eye could see. I remember taking a very long, slow breath. As the warm air filled my lungs, an intense sensation washed over me. It was the first time I felt a level of appreciation and pride for the courage my family had to risk their lives for us to have the freedom and liberties that our country has provided for us.

Growing up as a child in poverty with two completely different cultural expectations was a challenge. It became my mission and vision to one day own a business that would create unity and allow each individual to be their authentic self. Unfortunately, I had to face some personal adversity and had to close my store, but something profound happened while my salon, Style Theory Hair, was open.

My living room became a haven for victims of abuse where they came to share their stories on our Facebook live stream.

It was when this happened that I realized that our community was silently suffering from things that were not talked about. From that point on, my mission became to find a way to help parents who were victims of alienation and abuse, and so I started a docu-series called Become Celestial Theory.

In this docu-series, he’ll show people first-hand what PTSD, the emotional abuse, and the life challenges most face behind closed doors look like. He also shares key information on how any victim can take back their power and, despite the circumstances, continue to heal themselves by creating a community.

Although I specialize in repairing damaged hair, I also write Google reviews to help contribute to continued business growth. I reached over a million views because I believe that no small act goes unrecognized. As a Calgarian, I would like to see more development of social relationships between the city, businesses and consumers to achieve our community goals of continued growth and success.

I attribute much of my success to my mentors. Susan Veres was the former vice-president of the CMLC and helped build the Calgary East Village. She taught me how to turn my creativity into a brand and bring my visions to life.

Another powerful woman I have known is Wanda Kogawa for over 10 years. She is an expert in building business processes. Her commitment to her family and her charitable work inspired me to follow in her footsteps. She keeps me in awe of her ability to reconcile family life and professional life. She taught me a lot about risk management and helped me fine-tune many of my business practices. Wanda has a way of asking tough questions while challenging you to find your answer. I adopted his business style for mine. It’s a win-win model.

Finally, Colleen O’Shea is a woman strong in her convictions and even stronger in her supporting role. She has a way of bringing out your potential. She’s all about tough love that makes you better. If you’re looking for pity, she’ll be the first to rain down on your parade. Her personality is lively and beautiful. She taught me that when you are depressed, you are never absent. I learned to be strong. She turns people into rockstars. No surprise since his son has a golf scholarship. Colleen is like a second mom to me. She is my rock.