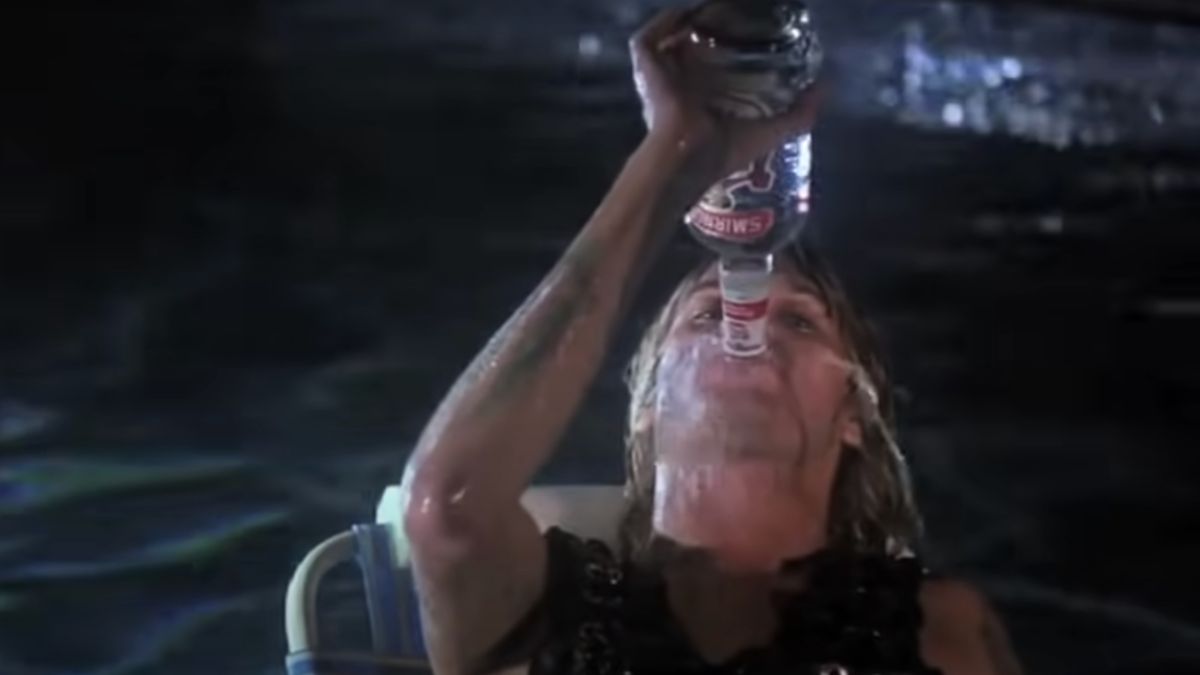 Few moments summed up the over-the-top decadence of ’80s hair metal quite like Chris Holmes’ infamous 1988 pool scene. The Decline of Western Civilization, Part II: The Metal Years. Directed by Penelope Spheeris (Wayne’s Worldet al.), the second part of his Decline The documentary series captured the glam metal scene at its zenith, focusing on the clubs, bands and poofy-haired personalities of Los Angeles’ Sunset Strip.

Spheeris conducts interviews with a wide range of artists ranging from the mega-hit (KISS, Aerosmith), to the future (Dave Mustaine, Poison) to an unnamed parade of unknown glam metal caricatures who each insist that ‘they will become “The Next Big Thing”, but whose fame would never exceed the documentary.

Of the film’s endlessly colorful moments, none rival the sublime excess – and unreserved tragedy – of WASP guitarist Chris Holmes, seated in a floating chair in his swimming pool, decked out entirely in leather and studs, s waving while seemingly downing vodka straight from the bottle. Her mother, sitting by the pool, watches in grave silence.

As the scene unfolds, Spheeris attempts to delve into the psychological roots of Holmes’ behavior, but of course he is terribly drunk (he estimates his consumption that day at five pints of vodka and counts), and his capacity for introspection is limited. And yet, when asked if he would have liked to be a bigger star, he replied: “I would have liked to be a smaller star. I don’t like being the person I am. I just don’t like it. There’s not a hint of posturing or even self-pity; it’s a stark glimpse into the frayed psyche of a man who, outwardly, seems to have it all but is nonetheless deeply troubled. Changing the subject, Holmes unscrews a bottle of vodka and appears to swallow the lion’s share of it, though he pours a lot on himself in the transaction. He then gathers what looks like three more bottles floating in the water and sinks into the water as his mother stares wordlessly at the camera.

A set of three Decline The documentaries were released in 2015. In an interview at that time, Spheeris revealed that his initial reaction to the interview was that the whole track was unusable, due to Holmes’ impairment. “When I shot Chris Holmes, you know,” she said Gold mine, “I thought we didn’t have the interview. I remember saying, ‘We’re going to have to do this again. Because we got nothing. The guy just sits there fucking and we got nothing… I never imagined this would be the most talked about and most memorable moment in the movie. She also clarified that when Holmes drinks from a bottle at the end of the scene, it’s actually mostly pool water.

The scene still looms large in the annals of heavy metal infamy. Lita Ford, who was briefly married to Holmes in the early 90s, has alleged the scene “destroyed his career” and is the reason Holmes no longer lives in the US (he now lives in France with his wife and manager Cathy-Sarah Holmes). In 2017, Ford said, “That’s not vodka in that bottle. Can you imagine pouring vodka on your face like that? It was a setup, and it really ruined his career. It just destroyed his career, that’s why he doesn’t live in this country anymore.”

In 2017, he shot a new version of the stage for Duke TV and in his own 2021 documentary, Mean Man: The Chris Holmes Story, we find the musician lively and sober, playing small solo exhibitions in Europe while antagonizing French motorists and shopkeepers with a defiant resistance to speaking their language. In February, it was revealed that Holmes had been diagnosed with throat and neck cancer and that in April he had completed his last treatment with radiotherapy, although he continued to struggle with the devastating effects of the chemotherapy. This month, Holmes announced a fall tour of the UK and Ireland.

Watch the original and infamous interview from the pool below.