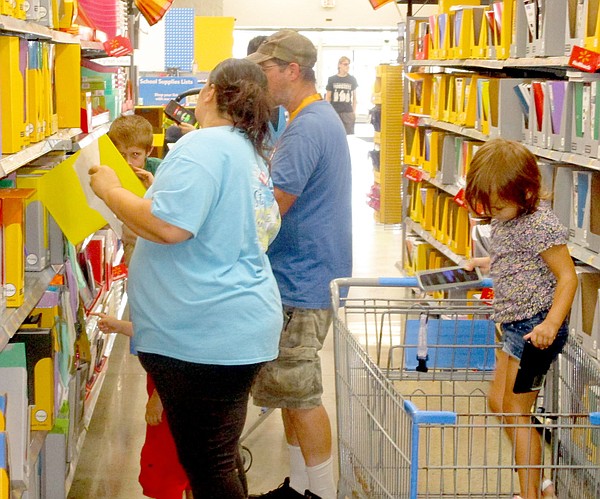 Destiny Stelivan moved to Siloam Springs last year from Minneapolis, Minnesota, with her daughter to care for her aunt and get away from the realities of the city.

Along with adjusting to a new city, she found out her aunt had cancer. With these concerns, buying school supplies was not something that seemed feasible. That was until Sharilyn Schultz Ford came along.

As a single mother, Ford understands the difficulty of not having enough resources to buy school supplies. Over the years, Ford became a business owner and married someone who could partner with her for things like school supplies. With her children growing up, Ford thought back to that time and realized that someone else could benefit from help as well.

“I feel like the Lord just put it on my heart,” Ford said. “When I woke up this morning I saw the need was even greater than I realized. So I just put it out there and asked people if they wanted to contribute. and the contributions have been extremely supportive in this way.”

Ford said she raised $2,000 and budgeted $50 per child. Ford has 40 children she shops for, she said. On Thursday, she bought five families with 21 children pictured, Ford said. She also ran errands for the rest of the families Friday night and Saturday night, Ford said.

Some families backed down because their own families stepped in to help them once they found out they had contacted Ford, she said. Others like Stelivan, who is helping her aunt raise her five cousins, nieces and with the help of her brother Sean, were just grateful for the help.

“It means a lot because, like I said, we’re starting over in a totally different field,” Stelivan said. “I really appreciate that.”

Autumn Rhine, who had just come from work, found Ford through posts on the What’s Up Siloam Facebook group, she said.

“It means knowing that my children will be able to have the things they need to go to school,” Rhine said.

With the pressure of living on one income, covering school supplies for her four children is a big relief, Rhine said.

Ford said she had no plan but was taking it all in small steps.

“It was literally just a thought that grew,” Ford said. “So I take it moment by moment and try to figure it out myself.”

Photo submitted Sharilyn Schultz Ford (center) poses with the Stelivan family with their school supplies. The Stelivans are one of five families Ford helped with school supplies on Thursday.