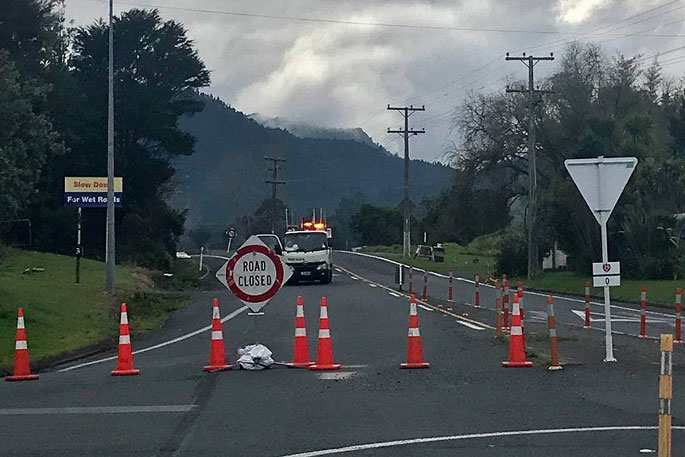 One of the first police officers at the scene of an alleged murder on a winding Coromandel Peninsula highway told a jury how a pool of blood on the side of the road revealed the location of the crime scene.

Adrian Reginald George Phillips, 23, is on trial at Hamilton High Court. He faces a murder charge in connection with the death of Bayden Williams, 20, who was found dead on Kopu-Hikuai Rd on the evening of Wednesday August 5, 2020.

It is alleged that Phillips drove Williams’ vehicle off a twisty stretch of road. When Williams scaled a bank to the side of the road, around 7 p.m. that evening, Phillips allegedly fatally wounded him by shooting him three times in the shoulder, thigh and head with a shotgun.

The Crown argues that Phillips was in a murderous rage when he fired the shots. His attorney said Phillips fired in self-defense because he believed Williams was coming at him with a knife.

On Monday, the jury heard evidence from Constables Benedict Wayne and Blake Wilson, who were working late that evening.

Wayne told the jury that he and three colleagues were sent to Kopu Hikuai Rd at 7:42 p.m. that evening to witness a reported shooting incident.

He said they had been tasked with “searching a crime scene… looking for a wrecked vehicle on the road and a body”.

About 6.7 km down the winding road, they found what they were looking for: “A large pool of blood on the left side of the road…that’s the first thing we saw.”

Wayne came down and looked at the bank. He saw the shape of a crashed Jaguar saloon in the dark.

“I could see there was a body lying in front of the vehicle.”

Further examination of the blood pooled on the side of the road revealed that it contained what appeared to be brain matter.

With the aid of a powerful torch, he climbed up the bank towards the car, at one point losing his footing and sliding towards it, but stopping before he got to the vehicle.

“I tried not to disturb the scene, but I needed to check for any signs of life.”

Wayne checked the man’s carotid artery, which had no pulse. He wasn’t breathing, even though his skin was warm to the touch. His hair was smeared with blood.

Constable rolled the body over to expose the left side of the man’s head.

“I could see a tunnel-like penetrating wound in his head, in front of the left ear.”

Nearby was a used 12-gauge shotgun shell.

“He looked what I would call fresh.”

Shortly after, a second police car, a St. John’s ambulance and police detectives arrived at the scene.

The second police car accidentally drove through part of the pool of blood as officers were arriving or departing to secure a roadblock to the east at the turnoff to Whangamata.

Cross-examined by defense attorney Hannah Stuart, Wayne said he and his colleagues had otherwise been very cautious.

“There are a lot of people arriving on the scene, aren’t there? Stuart asked. “Would you say there is reasonable foot traffic? »

Wayne replied, “If you were asking if people were trampling, contaminating the scene, no, we were very concerned about preserving the evidence.”

Earlier, police also heard testimony from Senior Constable Richard Waller, who was off duty when he walked past a vehicle parked on the side of Kopu-Hikuai Rd earlier in the evening.

Waller said he saw a man near the ute throw some kind of object into the bush, but he couldn’t tell what it was, other than it was obviously something heavy.

“You wouldn’t make that effort to throw a tennis ball. It was more like throwing a medicine ball.