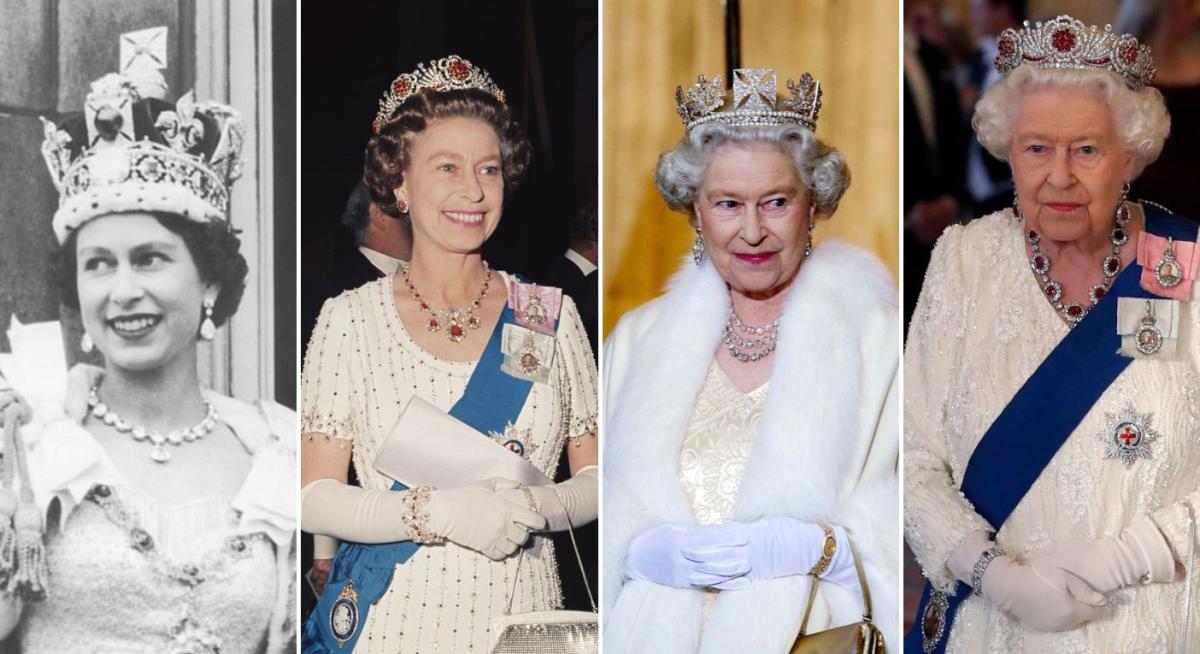 The story behind the Queen’s iconic hairstyle

Much like her 70 years of service to her country, the Queen was just as fiercely loyal to her hairstyle, which has remained somewhat unchanged over the years.

The perfectly styled hairstyle gave the late monarch one of the most recognizable and iconic silhouettes in the world, appearing on banknotes, stamps and various royal memorabilia.

But there’s actually a big reason the queen stuck to her assertive style and it’s the same reason she always wore bright colors.

According to her daughter-in-law Sophie, Countess of Wessex, the reason for the brightly colored dressing is that the Queen wanted to make sure members of the public could see her through the crowds.

“She needs to stand out so people can say ‘I saw the Queen,'” the royal said in the documentary. The Queen at 90.

“Remember, when she shows up somewhere, the crowd is two, three, four, 10, 15 deep, and someone wants to be able to say they saw a piece of the Queen’s hat in passing.”

Read more: How the Queen showed her support for Kate and Meghan

Making herself instantly recognizable was also said to have been a factor in the Queen’s choice to keep the same hairstyle.

In fact, according to some insiders, the monarch insisted on having her hair completely symmetrical, so that whichever side you viewed her, that iconic profile remained the same.

“I met someone, who was the Queen’s hairdresser, who said what she loves and insists on is having her hair completely symmetrical,” Dame Esther Rantzen told TV channel, as Eden Confidential of the Daily Mail reported.

She continued, “Her hair should be identical from profile to profile, so that whichever way people look at her, her hair is always exactly the same.”

So what exactly was the queen’s style?

“Queen Elizabeth II was known for a classic shampoo and set, which would have been representative of the era in which she was crowned,” Neil Moodie, founder of Neil Moodie Studio told Yahoo UK.

“It then became her signature style over the years. She adopted her natural curls, but these were more refined and displayed symmetry at all times. This meant that whether she was photographed left or right, his style remained consistent.”

Read more: The Queen by People Who Knew Her

Nicole Petty, hair expert for Milk + Blush, thinks the enduring nature of her iconic look is part of the reason British audiences love her style, associating it with being “in essence the queen”.

“During her 70-year reign, the Queen’s hair has remained as unshakable as her decision, with a few minor exceptions over the years,” she explains.

“The Queen’s style allowed her to embrace her natural curls, stay off the shoulder – usually sitting around her jawline length – and always perfectly styled.”

So, has the Queen ever strayed from her signature style?

In June earlier this year, in photos shared on the Royal Family’s Instagram account, the Queen wore a pretty floral dress to meet the Right Honorable Margaret Beazley, Governor of New South Wales.

But it was her hairstyle that caught the attention of royal fans.

“She changed her hair, that’s so sweet,” one wrote on social media.

“Has Her Majesty had her hair cut?” another asked.

“Oh I can see her new hairstyle, it’s shorter than usual,” another fan agreed.

Read more: How Her Majesty reached the age of 96

Petty says Her Majesty also experimented with volume in her hairstyle.

“Particularly in the 1980s, her hair had a lot more body and height, which was a perfect match for the more experimental styles of the time,” she explains.

“His hair also got much fluffier in his later years, but remained as neatly styled as in his youth.”

As for her color, Petty says the monarch reportedly stopped dying her chocolate locks in the 1990s, “allowing her brown hair to give way to her stunning signature white hue.”

Read more: The Queen’s most defining fashion moments throughout her life

Of course, there was also the time when the Queen’s most trusted aide had to cut and style her hair during the COVID-19 lockdowns.

In the updated version of his bestseller The other side of the coin: the queen, the chest of drawers and the wardrobe, Angela Kelly has detailed her experiences taking on the role of cutting and styling the monarch’s hair during the coronavirus pandemic.

In the new chapter extracted by Hello! magazine, Kelly wrote, “Beginning in March 2020, I washed the Queen’s hair weekly, styled and styled it, and even cut it if needed. My team named it Kelly’s Salon.”

Read more: Was the Queen the ultimate feminist?

But the new found role didn’t come without some trepidation from Kelly.

“For the first two weeks, I was shaking,” she said. “I had only done her hair once or twice before on board the Royal Yacht Britannia. The Queen was very kind in advising me on the very precise way to put the rollers on.”

As Kelly grew more comfortable in her new duty, the Queen was not afraid to voice her opinions.

“As I gained more confidence, I’m sure the Queen thought I was a professional and started yelling at me, ‘Don’t do it, do it this way. That’s right, you have it, don’t change it. ‘ I was thinking, my God, I need a gin and tonic,” Kelly said.

“So, while the queen was under the dryer, I said to her, ‘I’m going for a drink because it’s so stressful, that’s what you need.'”