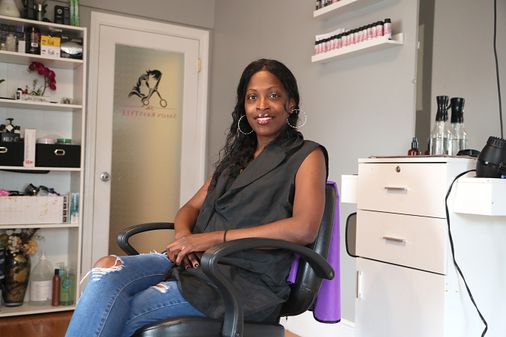 When a trip to the hair salon isn’t scary, it’s a beautiful thing

Despite an enthusiastic recommendation from a family friend, Teixeira admitted she had low expectations when her cousin brought her to his appointment with Krystal Everett, owner of KrySTYLE Salon in Chelmsford, last winter. .

Teixeira, who stayed home due to her chemotherapy regimen for colon cancer, said she was ‘in tears’ watching videos and photos of her pro-style son relaxing on the couch in the living room with Everett and his cousin’s son, who had accompanied him for moral support.

“Krystal explained everything and said [him], ‘If something bothers you, let me know.’ She followed his lead, let him go to town with the spray, asked him if he needed any breaks, and when he did, she said, “I need a break too. !” She made him feel safe, that’s all I can ask for,” said Teixeira, who has also since become a KrySTYLE Salon client.

“Krystal is a treasure. I don’t think she realizes the difference she makes.

Everett, a Chelmsford resident who has four children and nearly 21 years of hairdressing experience, launched her Tender, Love, Care (TLC) program to accommodate customers with special needs – which she defines as “any person who needs special treatment”. – based on personal experience.

During his previous 17-year career in the social services field, Everett’s responsibilities as a case manager and program manager for a nonprofit day program included bringing adult clients to salons hairstyle. Despite booking appointments in advance, she said only one or two would usually receive buzz cuts out of a group of five or six.

“All of a sudden, stylists would need to take a break, go to the bank, or watch their kids. We were finally leaving and clients who weren’t getting their hair done were looking at me like, ‘What about me?'” , Everett recalled, noting that she had “never been livid like this in my life” when she had to pretend that the visibly uncomfortable staff simply ran out of time for the band.

“I was already a licensed hairdresser, so I didn’t mind cutting their hair in the group home, but the goal was to integrate them into the community,” she added. “I decided when I opened my own salon, it would be a place where they felt beautiful just like anyone else.”

Everett, whose grandmother and mother did hairstyling, said she felt “born” into the profession.

“My mom used to find my Barbie dolls with their hair cut in every style,” she said.

Ashleigh Sheehan from Tyngsborough said she was ready for a fit when she took her 7-year-old son to KrySTYLE Salon in June 2021 for his first professional haircut since the COVID-19 pandemic began. The hardest part for his child, who has cerebral palsy and developmental delay, was his initial anxiety, which Everett eased by playing his favorite songs from Lizzo and New Kids on the Block.

“Now he looks in the mirror and says… ‘See you next time!’ And when her hair gets long, he touches his head and says, ‘Call Krystal,’ Sheehan said in amazement. “I appreciate that she’s super flexible and blocks time. [he] needs because going out in the community is a learning experience for him. We have spent enough time isolated at home. He needs to know there’s a bigger world out there.

As Sharon Styman-Lussier can attest, the TLC program is also important for adults. The Merrimack, NH resident has been a regular client of KrySTYLE Salon for years, but recently contacted Everett to cut her hair very short in preparation for chemotherapy treatments.

“I’ve had long hair for most of my life, so it was really scary,” Styman-Lussier said, noting that Everett also cut and styled her wigs “which are perfect now.”

“Krystal kept saying I was a rock star and telling me how beautiful I looked — all important things when you’re feeling so much anxiety,” she added. “The experience was warm and cozy, and everyone was so nice that it felt really special. She’s a very talented stylist, but she also helps people. You can’t ask for more than that.

You can reach Cindy Cantrell at [email protected].